Tea Time first arrived on the scene at the 1986 Pennsylvania gathering when Rick, Roger, Nothin’ Fancy Dave, Major Tom, King George and Sunny got together to make a tea kitchen. It was just a small, intimate affair back then, and it wasn’t until the subsequent North Carolina gathering that it got its name as a result of Nothin’ Fancy Dave continually hollering in a refined English accent, “What time is it?? It’s tea time!!” And so the name was born.

Since then Tea Time has become a large extended family that shows up to both U.S. regionals and nationals a like. (According to Clearwater, the crew at the last TN national was about 150 all told.) 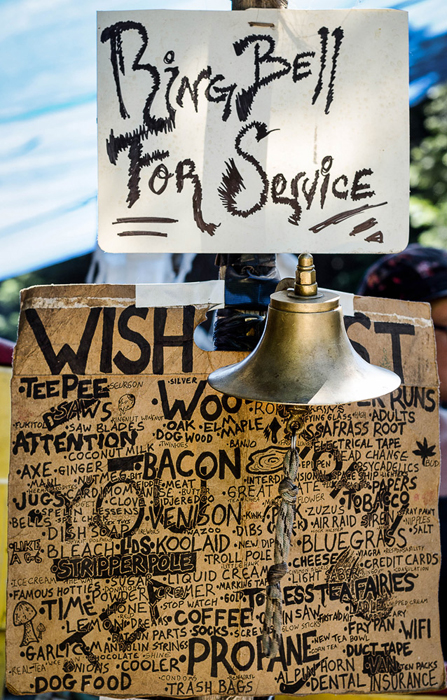 “We are the over-glorified water boiling station at this Rainbow happening.”

This mission of Tea Time is pretty simple: keep people hydrated with good safe boiled water (tea). This means that tea is available roughly 24/7 at their tea house, and very occasionally they’ll even send a couple of kegs of tea to main circle.

One thing to take note of, however, is that Tea Time is NOT a kitchen, but a tea house. In fact, for decades it had a strict rule about never cooking/serving food. It was only recently that they’ve chosen to serve food to their crew (so the crew doesn’t have to wander off and look for food elsewhere). Still, to the world at large, Tea Time remains strictly a tea house. 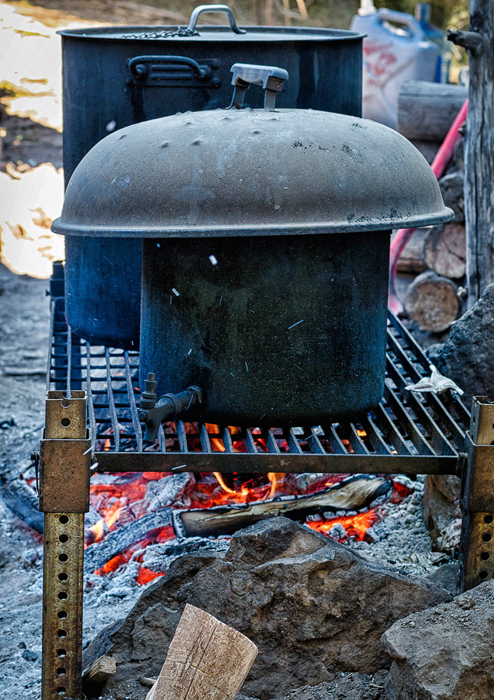 According to Clearwater, Tea Time truly has one of the hottest fires at the gathering: it’s 24/7 with very few breaks. In fact, only the sturdiest of grates will ever make it at Tea Time and even then, they’ll have to be changed out every so many years.

Making tea for the world is no easy business. It takes cords of wood, lots of hard work, and a committed crew to keep folks at a national gathering healthy and hydrated. The water is always boiled for a minimum of 20 minutes and tea fairies with washed hands make sure that no cross contamination of “touching the thing to the thing” happens. And gatherings where finding purified water is a challenge, Tea Time really shines. It’s the one place you can go that will consistently have great tea for you to stay hydrated with.

If you’re anywhere in the vicinity of Tea Time at a gathering, you’ve probably heard their horns. According to Tea Time Rick (one of the founders), the horns were never meant to be this mass of constant noise all night long. The horns started in North Carolina when Nothin’ Fancy Dave brought a coil with about 10 wraps on it and stuck a mouth piece on it. You had to blow it REALLY hard to get any sound out of it. What came out sounded like a charging elephant and could really trip you out.

Since then, the younger generation has taken enthusiastically to bringing plastic horns and playing them at all hours of the day and night. So much so that it started scaring off some of the musicians who came around. (Originally Tea Time had a reputation for being a music-centered tea house and even had a “house band.”) A new rule had to be made that the horns remain silent when guitars are being played.

These days, whether you’re going to a regional or to the US national you’re likely to run into some version of Tea Time. As they would say, “Stay hydrated. Stay sanitary. Drink Tea!”

Have any stories about Tea Time? Share them in the comments!